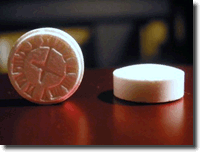 This history of ecstasy begins in the early twentieth century. Only through accident was it ever created by Mannish and Jacobsohn, two German Scientists working for Merck in 1912 as an intermediate to a vasoconstrictor known as hydrastinin. Ecstasy (ecstasy is the common name given to the drug methylenedioxymethylamphetamine (MDMA)) was patented in 1913 (patent #274.350) by the German chemical company Merck supposedly to be sold as a diet pill (the patent does not mention any intended use), the company decided against marketing the drug and had nothing more to do with it. The US army may have experimented with MDMA in 1953, possibly as truth serum. However, for obvious reasons this cannot be confirmed.

The next chapter in the history of ecstasy begins with Alexander Shulgin. He is the man responsible for the modern research of MDMA. After graduating from the University of California at Berkeley with a Ph.D. in biochemistry, Alexander Shulgin landed a job as a research chemist with Dow Chemicals. Among his many achievements for Dow Chemicals was one profitable insecticide and several controversial patents for what were to become popular street drugs. Dow was happy with the insecticide but Shulgin's other projects created a parting of the way between the biochemist and the chemical company. Alexander Shulgin is also the first reported human to use MDMA.

Shulgin continued his legal research of new compounds after leaving Dow, specializing in the phenethylamines family of drugs. Penethylamines are a family of chemical compounds that contain the 2-phenylethylamine chemical structure and also have additional modifications at the phenyl ring, sidechain, and/or amino group. Many of them are psychoactive drugs, including stimulants, psychedelics, and entactogens, which exert their effects primarily through modulation of the monoamine neurotransmitter systems. The substituted phenethylamines encompass the substituted amphetamines. MDMA is but one of 179 psychoactive drugs which Alexander Shulgin described in detail, but it is the one which he felt came closest to fulfilling his ambition of finding the perfect therapeutic drug.

Continuing on in the history of ecstasy, because MDMA was already patented in 1913 it held no profit potential for drug companies. A drug cannot be patented twice and before marketing a new drug, a company has to show that the potential side effects are justified by the drug's benefits as a medicine, and this involves long and expensive trials. The only way of recouping that expense is by obtaining exclusive rights to sell the drug through holding its patent. Only a few experimental therapists researched and tested the drug (between 1977 to 1985) for use during psychotherapy sessions.

Ecstasy is classified as an empathagen. The terms empathogen and entactogen are used to describe a class of psychoactive drugs that produce distinctive emotional and social effects similar to those of MDMA ("Ecstasy"). Entactogens are often incorrectly referred to as major hallucinogens or stimulants, although their effects are often somewhat characteristic of such.

These drugs appear to produce a different spectrum of psychological effects from major stimulants such as methamphetamine and amphetamine or from major psychedelic drugs such as LSD or psilocybin. As implied by the category names, users of entactogens say the drugs often produce feelings of empathy, love, and emotional closeness to others. However, there have been only very preliminary comparisons of these different drugs in humans in properly-controlled laboratory studies.

During the history of ecstasy, psychiatrists began to utilize the drug with their patients to clear their defenses and better relate to them. The most prominent desirable effect of ecstasy is how it breaks down the walls of communication by alleviating feelings of guilt, remorse, and fear. Its original name for street sale was empathy, but they changed it to ecstasy because it would sound more marketable.

The history of ecstasy shows that in the early 1980s MDMA began to be used non-medically, particularly in Texas under the name Ecstasy. In 1987 the rave culture began to pick up on the small Spanish island Ibiza. Within four years this drug use had gone full circle and found its way back home. Users from warehouses and outdoor raves in late 1980's England began to move to San Francisco in the early 1990's. In late 1991 and early 1992 the authorities in England had seized many large supplies of ecstasy. This combined with the increased demand caused insufficient supply. Dealers began to sell fake ecstasy, and people began to use LSD instead.

In 1985 the history of ecstasy reports that this drug received massive media attention when a group of people sued the US Drug Enforcement Agency (DEA) to try to prevent them from outlawing the drug by placing it on Schedule 1. The US Congress had passed a new law allowing the DEA to put an emergency ban on any drug that it thought might be a danger to the public. On July 1st 1985, this right was used for the first time to ban MDMA.

A hearing was held to decide what permanent measures should be taken against the drug. One side argued that MDMA caused brain damage in rats, the other side claimed this might not be true for humans and that there was proof of the beneficial use of MDMA as a drug treatment in psychotherapy. The presiding judge after weighing the evidence, recommended that MDMA be placed on Schedule 3, which would have allowed it to be manufactured, used on prescription, and subject to further research. However, the DEA decided to place MDMA permanently on Schedule 1. Trial research into the effects of MDMA on human volunteers resumed in 1993 with the approval of the Food and Drug Administration (FDA). This was the first psychoactive drug approved for human testing by the FDA. 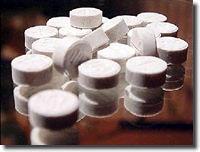